Prof Enrico Motta joined Roberto Perrone on his drive-time show on BBC Three Counties Radio to discuss MK:Smart. Enrico compared rainfall in Milton Keynes to his home town of Messina in Sicily and gave examples of the kind of solutions that MK:Smart is envisaging, to improve water management in Milton Keynes. 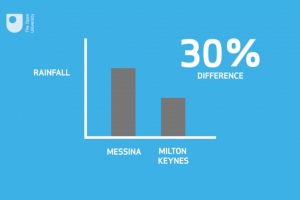 Enrico explained that MK was one of the UK’s fastest growing cities. He reflected that MK:Smart, a large-scale smart city project led by The Open University, would be searching out solutions for dealing with the inevitable stress on the city’s infrastructure resulting from its dramatic growth.

Enrico went on to explain that a smart city is one where energy and water consumption are sustainable and where effective solutions to mobility are provided, which ensure a congestion-free environment.

Perrone was also curious to find out what would be behind an MK:Smart personal water management app. Enrico clarified that we will be providing citizens with information about their water consumption to help them make better informed decisions about water use.He also illustrated an example of how aggregating data from sources such as satellite data, ground sensors and weather forecasts could power a simple  app advising people on effective use of water in the garden.