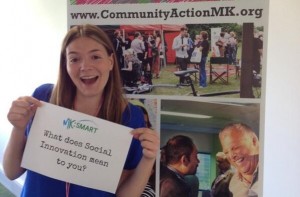 This well-attended, vibrant event, hosted by Community Action MK, attracted participants from a variety of groups including the University of Northampton, Wolverton Food Train, Make A Difference and the National Energy Foundation, among others.

The focus of the day was Social Innovation. Speakers from organisations such as ‘Locality’ and the ‘The Plunkett Foundation’ shared their knowledge and experience of community initiatives.

The purpose of the Citizen Lab workshops is to generate ideas for helping Milton Keynes deal with the forecast strain on its infrastructure due to its dramatic growth trajectory.

Discussion at this workshop included responsible domestic water usage. Twitter conversation at the event included a thread from Community Action MK, on whether or not it was irresponsible to take ‘an hour in the shower.’

MK:Smart Citizen Lab is part of the MK:Smart project, a smart city initiative led by The Open University.  The People Powered Change workshop in Central Milton Keynes was just one in a series of events giving you the chance to share your ideas on how to address local infrastructure issues.

The next Citizen Lab event will take place 6 – 7pm, 16 June at The Open University. More detail will be published closer to the time.