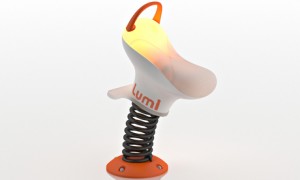 Playtime is definitely not over. When Hristo Alexiev of Playground Energy, recent winner of the Guardian’s ‘Activate tech talent day’, was invited for an interview he had plenty to share about his company’s work. Hristo’s next initiative planned for Milton Keynes, is an exciting demonstration for MK:Smart.

Interviewer, Adam Davidi, wanted to know how Playground Energy were ‘reinventing the first gaming platform – the playground’. Hristo explained that his organisation was formed with one task in mind –  ‘to motivate children to play more at playgrounds’.   They encourage them do this through harvesting the kinetic energy from playgrounds and giving it back to children in the form of light or sounds in order to motivate them to play more.  ‘For example, when children play on the Lumi spring toy the body of the toy is illuminated by light and part of the produced energy powers a built-in speaker, which can play music from mobile devices via bluetooth’.

Playground Energy are developing new products for interactive playgrounds which they expect to be ready by the end of the year. Watch this space – playtime in MK may never be the same again.