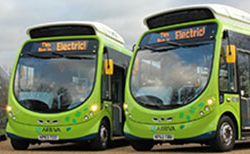 MK:Smart members attend a ‘Transport Futures’ Workshop, to share insights from the early days of the project.

Lessons learned during the early stages of MK:Smart and the Milton Keynes Council’s Low Carbon Living programme were discussed at the second Workshop on Smart Urban Transport Policy Futures, funded through the Higher Education Innovation Fund (HEIF). The event took place in the Maritime Campus of the University of Greenwich, an event attended by over forty participants from academia, government and business. 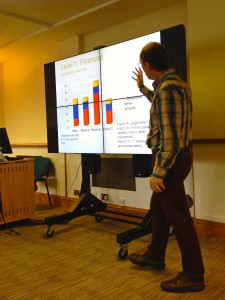 The first workshop took place in 2013 and was centred on smart transport. This year the scope was expanded to include all dimensions of smart urban futures. The exchange of ideas had the purpose of identifying opportunities and developing a shared vision for applications in the intersection of energy, transport and ICT, benefiting from the experiences of smart city pioneers at national and European levels. In addition to practical matters like funding sources and potential collaborations, discussions about the role of strategic collaboration and partnerships between various actors played a prominent role in the dialogue fostered by the two-day workshop. The discourse on smart cities has been traditionally dominated by technological issues, but as technologies mature the discussion has expanded to include aspects like societal well-being, business development and community engagement.

The event was international in scope, both because of the participants and because of the cases discussed, which included smart city developments from the UK, Germany, Luxembourg, Catalonia, and even Cuba. It is interesting to note that many of the sessions in this international event were centred on smart transport developments initiated in Milton Keynes, owing to the pioneering character of the city. In addition to the insights from the early days of MK:Smart, the workshop benefited from perspectives provided by experts from the following projects:

– Bus route 7, an economically competitive electric bus route with zero tailpipe emissions, with inductive charging points that make possible for the electric buses to operate continuously all day in the demanding route that runs between Wolverton and Bletchley.

– E-Car Club, a pay-per-hour car club with a fleet of zero-emission Electric Vehicles first trialled in Wolverton (a constituent town of Milton Keynes) and now operating in Oxford and London

– A collaboration of the OU and the Ramon Lull University exploring smart city branding in Milton Keynes and Barcelona.

While the Milton Keynes projects that were discussed were very different, they had several key features in common, as they contributed to economic development and had sound business cases, but they also contributed to addressing economic inequalities and climate change, improved local well-being, and accelerated de-carbonisation of transport sector in the region.

The developments discussed in the workshop suggest an ongoing transition in the vision of smart cities, which is also reflected in the Vocabulary for Smart Cities recently published by the British Standards Institute (PAS 180, also discussed in the workshop). According to the BSI definitions, smart city systems provide digital infrastructure and digital services to monitor, manage and control physical and social resources, contributing to the effective integration of physical, digital and human systems in the built environment to deliver a sustainable, prosperous and inclusive future for its citizens. A complementary concept, that of smart community, refers to “a community that maintains or improves its quality of life sustainably by minimizing its environmental impact, using natural resources and applying policies of renewal and replenishment, and running its economy and social life so that growth is decoupled from increasing and non-sustainable exploitation of natural resources”.

Many of the developments in Milton Keynes, like bus route 7, the e-car club and the low carbon living agenda suggest that Milton Keynes has been developing its position as a smart community for years, providing a solid foundation to the transition towards smart cities. The workshop suggest that lessons from MK:Smart, building on this foundation, can set an example and contribute to the dialogue about the new conception of the smart cities currently taking place.