A prominent innovation charity has pointed to MK’s IoT network as a hot topic of the year ahead. 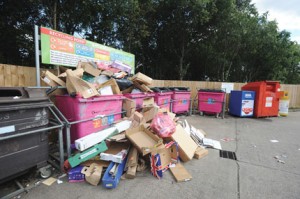 Some wheelie bins fill up more quickly than others. Picture courtesy of MK NEWS / OneMK

MK:Smart was named in an article on Nesta’s website entitled “Internet of everything, coming to a neighbourhood near you.” It describes the Internet of Things work, related to MK:Smart, being carried out in Milton Keynes. This includes sensors being installed in local wheelie bins to detect how full they are. Emptying bins only once they are full could mean efficiency savings for MK Council.

According to the article from Nesta, a charity working to boost innovation in the UK, the sensors being used give out a unique kind of signal with a long wavelength. The signals sent out require less data than even routine activities using Wi-Fi, such as uploading a photo to WhatsApp.

As we’ve reported previously, sets of this type of sensor (Low Power WAN) have also been used for the intelligent monitoring of parking spaces in MK. In particular, a highly informative trial was carried out at Milton Keynes’ train station to analyse parking habits.