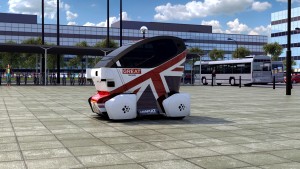 This driverless pod, destined for MK’s redways, has been unveiled in Milton Keynes and London.

This prototype vehicle, displayed today at a Transport Systems Catapult launch event in Greenwich, will be the first autonomous vehicle in the UK to work on public footpaths.

The electric-powered vehicles can seat two people and are being built by RDM Group, one of the UK’s fastest growing advanced engineering companies, and will be equipped with sensor and navigation technology provided by the University of Oxford’s Mobile Robotics Group.

“Technology such as driverless vehicles, intelligent phone apps, and social media, will transform how we travel in the future – making journeys safer, faster, and more connected… Through the LUTZ Pathfinder programme, the Transport Systems Catapult has pioneered the introduction of driverless pods in Milton Keynes and the first ever tests in the UK will take place later this year in a controlled public environment.”

Later this year, the pods will be tested in an “urban laboratory” using a route agreed with Milton Keynes Council, a key partner in the project. This will be the first time driverless vehicles have been used in an urban community setting, and they will be gradually introduced following a series of tests in a safe, controlled, environment.