Small businesses and citizens had the opportunity to learn about technology innovation in Milton Keynes. 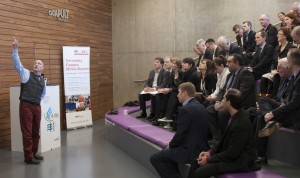 Friday saw the second day of the MK Future Cities Conference held at the Imovation Centre, the headquarters of the Transport Systems Catapult in central Milton Keynes. The event was a combination of mini-seminars and demos on the topic of smart city technologies, and drew attendees from around the UK, including fifty SMEs.

The highlight of the event was a marketplace of practical demonstrations of real-life applications of smart city technologies, which gave delegates an insight into several initiatives taking place in the context of the future city agenda, including some of those underway in the MK:Smart project. 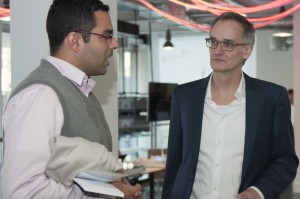 Professor Gerd Kortuem [right] invited businesses and citizens in MK to get involved in MK:Smart

Speakers included representatives from the Transport Systems Catapult, University Campus Milton Keynes, The Open University and BT. Gerd Kortuem and Alan Fletcher from the OU presented the range of benefits for businesses and citizens offered by the MK:Smart project and invited people to get involved.