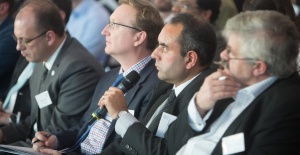 Last week, the project’s Commercial Manager, Rajinder Sharma was a member of an expert judge panel at the recent EIT Digital Awards at the City Hall in London.

Ten of the most exciting emerging technology companies from across Europe gathered at the City Hall in London earlier this week to participate in the UK final of the EIT Digital Idea Challenge Awards. A ground breaking carpooling app by KAROS won the final, and a cash prize of €40,000. Second and Third prizes were awarded to a website that let fans decide whether a concert takes place (ADDACT) and a travel guide that uses augmented reality (ZONZOFOX) respectively.

Rajinder Sharma who has responsibility for Business Engagement said, “Our participation exemplifies our desire to work closely with other technology clusters to foster the development of innovative solutions for SMART cities. This will be of great benefit to Milton Keynes as it will ultimately attract Europe’s best entrepreneurs to develop projects and test bed their technologies here as part of our Innovation Space”.

EIT Digital has been a Knowledge and Innovation Community, of the European Institute of Innovation and Technology, since 2010. It has been mobilising talents, ideas, technologies, investments and business across Europe and beyond to stimulate disruptive digital innovation and technologies. It brings together entrepreneurs from a partnership of over 130 top European corporations, SMEs start-ups, universities and research institutes. The headquarters are located in Brussels with co-location centres or nodes in Berlin, Eindhoven, London, Helsinki, Paris, Stockholm, Trento, Budapest and Madrid. The London node was launched last year, and is currently an anchor tenant in a major development project known as Imperial West, a new £3 billion research quarter being delivered by Imperial College in West London. Its founding partners include UCL, Imperial College, University of Edinburgh, BT, IBM, Intel, Vodafone, the Digital Catapult and the Institute for Sustainability.

The Idea Challenge Awards aims to reach out, identify and support the best digital start-ups in Europe especially those that are focused on fast growth within the EU and worldwide.  For further details, click here.