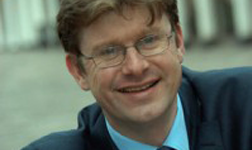 Greg Clark was appointed Minister of State (Cities and Constitution) in October 2013. As part of a visit to The Open University he spent some time with MK:Smart Project Director, Professor Enrico Motta who, supported by Milton Keynes Council Director of Strategy, Geoff Snelson and University of Bedfordshire’s Emeritus Professor, David Barrett, was delighted to outline the vision of the MK:Smart project and its position as a cornerstone of the wider Milton Keynes future city agenda.

The team were able to discuss the thought leadership that MK:Smart brings to the smart city landscape and how the city wide activity has led to Milton Keynes being represented on the government Smart City Forum.