Two teams of OU researchers, from KMi and MCT, took part in the Stride hackathon last week, and earnt first and third prize.

The Stride (Smart Transport Internet of Things Data Ecosystem) project combines the expertise of BT, Ctrl-Shift, Dartt, AIMES, and the University of Cambridge to provide a critical mass of transport data, including historical and real-time data collected from sensors.  Stride ran a development event on 12 February, which was hosted in Leeds by the telecommunication specialists aql. The goal was to develop working prototype applications that could demonstrate the potential of Stride’s large-scale transport data hub. Each team comprised one to three developers and only had seven hours to complete the task, with prizes being awarded to the top three teams. 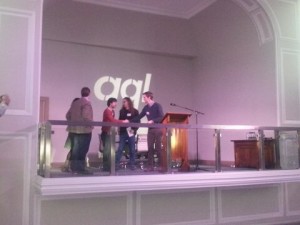 A team comprising KMi members Mathieu d’Aquin and Ilaria Tiddi and MCT (Maths Computing and Technology) researcher Stefan Foell was awarded first prize for their Pred-cident Web application, a predictor-backed heatmap of the likelihood of road accidents at a given point in time in the UK. Another OU team, comprising KMi-ers Alessandro Adamou, Enrico Daga and Keerthi Thomas earned third prize with their Detour application a mashup of Linked Data and live bus route Web Services which recommends public transport trips to points of interest and turns a dull bus ride into a sightseeing trip.
This competitive hackathon showcased how a few hours of development can deliver insightful and consumer-level analyses of today’s Big Data, a theme which is also very much at the core of the MK:Smart project.

Credit goes to aql for hosting the event, the Stride consortium for organising it and especially BT for on-site technical support.