On Tuesday 29 April The Open University celebrated the 45th anniversary of its charter being signed. OU led, smart city project, MK:Smart took this opportunity to showcase its work to the Vice Chancellor, Martin Bean, as well as OU staff. 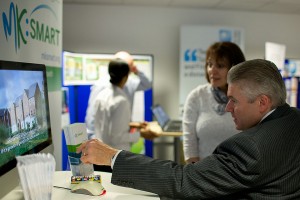 Administration Officer for MK:Smart, commented that there had been a warm reception to the project from both OU staff and Martin Bean. The MK:Smart stand included a video, commissioned for the occasion, in which Project Director, Enrico Motta, explains the smart city solutions proposed by MK:Smart.