Milton Keynes is known for its grid-based road network, intersected by over 300 roundabouts.  The complementary Redway network of combined foot and cycle paths stretches over 270km, as a signature feature of Milton Keynes’ unique combined transport network. 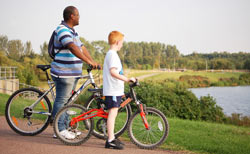 The MK:Smart CitizenLab recently hosted the first in a three year series of workshops that are designed to engage MK citizens in considering the development of city assets in the MK Future City Programme. This is an initiative, led by MK Council, at the heart of which sits MK:Smart, a £16m collaborative project led by The Open University that will explore and demonstrate the benefits of using big data to meet the challenges of growth that MK faces.

The initial workshop focussed on the opportunity that the redways bring to a smart city. This network of paths that criss-cross the city (generally surfaced with red tarmac which gives them their name) are used by pedestrians and cyclists. Cyclists use them to avoid traffic and many see them as a safer option for family cycling. MK:Smart thinking will ensure that this complementary transport network continues to play its part in a more intelligent mobility system.

Redways: An Asset Fit for the Future, held in Central Milton Keynes, allowed local community groups and redway users to discuss their experience of the redway network. Attendees agreed that redways were an asset to MK, but smart solutions were required to keep them safe, attractive and fit for purpose in the future. People reflected on how current issues could be resolved through making better use of information about redway use and associated transport data.

‘We were pleased by the enthusiasm of citizens and the variety of ideas which came out of the first MK:Smart CitizenLab workshop’, Lizzie Bailes, Community Action MK. 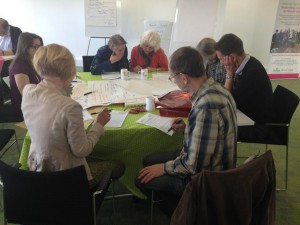 Workshop participants get into discussion mode.

Solutions suggested by attendees capitalised on MK:Smart’s evolving transport mobility mapping technology. MK:Smart will develop a dynamic Motion Map, which aims to display the real-time mobility of public and private transport, including pedestrians and cyclists, allowing users to make transport decisions based on current and predicted activity. Similarly, one solution discussed at the workshops was the possibility of an app that will track how redways are used. Attendees also mentioned safety concerns regarding cyclists and pedestrians sharing the pathways and the issues of lighting and visibility of other redway users.

Lizzie Bailes, workshop coordinator from Community Action MK commented – ‘We were pleased by the enthusiasm of citizens and the variety of ideas which came out of the first MK:Smart CitizenLab workshop’. Groups who attended included the Cyclists Touring Club and visually impaired members of the MK Reader Service. Overall the workshop will take forward eight ideas for potential projects that will be discussed and refined at the forthcoming People Powered Change event held on Wednesday May 21 10.00-14.00 at Margaret Powell House, CMK.