Milton Keynes Gallery hosted an evening of presentations and discussion that looked at Milton Keynes’s position as a city in both economic and development terms. MK:Smart was featured as a key initiative in supporting the growth of the city.

The event on 22 May, entitled ‘Priming the local economy’, was the third set of talks in the ‘Future City Debate’ series, promoted by the Fred Roche Foundation.

Paul Swinney from Centre for Cities opened the evening with a fascinating insight into Milton Keynes’s position in UK City rankings. Interestingly, MK has a strikingly low density of businesses in the city centre and enjoys one of the best business growth rates in the UK (see tables courtesy of the Centre for Cities – stats from ONS). 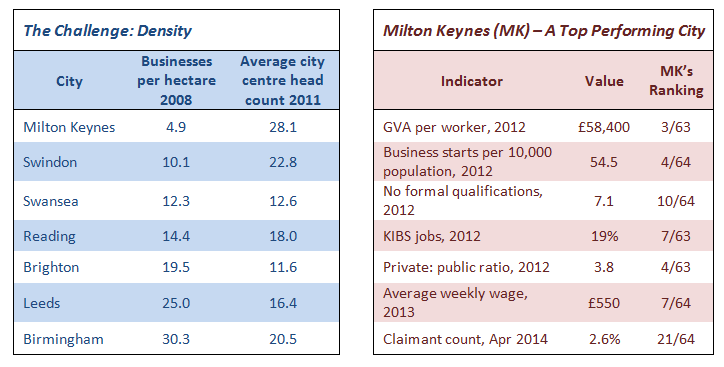 Geoff Snelson, MK:Smart Executive Board Member and Director of Strategy at Milton Keynes Council, introduced the audience to the MK Future City Programme and the MK:Smart Data Hub as enablers to delivering and sustaining growth. “Don’t neglect the quality of what you are doing today to build the future. Milton Keynes has some basics to address in terms of service delivery today but must combine this delivery with understanding our place geographically and economically” said Geoff.

Subsequent debate at the event ranged from transport and parking to the economic density of the Milton Keynes city centre and its reliance on the finance and service industries. However, risk of over-reliance is spread in Milton Keynes as we have a vibrant SME community.

It was suggested that technology such as the MK Data Hub will enable the city to respond in new ways to support Milton Keynes’s distinctive dispersed urban design. However, market forces are likely to deliver adaptive transport services when and where people want them, leading to intensification of the city centre.

The importance of helping Milton Keynes residents and businesses to understand how to use and benefit from data was raised, and indeed new support services were being created in the city to assist them.  Geoff explained that MK:Smart will also deliver similar initiatives through the project.

It was asked, ‘what evidence there was that the smart city vision has a positive impact on the economy?’ Paul was not aware of any hard numbers on this yet, but it is widely accepted that smart city implementations will save money through creating efficiencies and lead to better services.  Geoff commented that thinking was under way on how to sustain the MK Data Hub as a public asset at the end of the MK:Smart project. He suggested that in the future, the MK Data Hub ‘will be as integral to the local infrastructure, as roads are today’.

Geoff pointed the audience to a feature due out the  next day in Computer Weekly, evidencing how MK:Smart and the MK Data Hub had already been instrumental in attracting additional inward investment. The story announced that Milton Keynes is set to become ‘one of the first cities in the UK to establish a city-wide, open access internet of things (IoT) network’… through ‘a new 18-month project which is intended to demonstrate the ability of a large-scale infrastructure to cope with a large number of static and mobile sensors. Milton Keynes Council hopes it will attract technology firms to the city to use it as a testing ground for new services and create an ecosystem of IoT development startups’.

MK:Smart hope to deliver further talks at MK Gallery in the autumn. Look out for news of upcoming events here at mksmart.org or follow us on Twitter (@MKSmartProject).