MK:Smart project partners had a significant presence at the Transport Systems Catapult ‘Imagine Festival’  this week, to help launch the UK’s first Imovation Centre. Business Secretary, Vince Cable opened the centre for smart transport technology based in Central Milton Keynes. The centre will help transform the movement of people and goods around the world, aiming to help the UK secure at least a ten percent share of that market, generating up to £90 billion per annum for the UK by 2025. 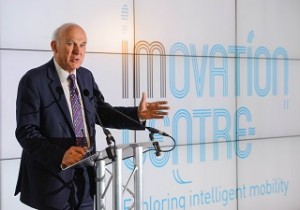 Executive board members and project partners from MK:Smart attended the launch of the Imovation Centre, which has significant cross-overs with the Transport work stream of our project.  The Transport Systems Catapult (TSC), which has the vision of turning transport ideas into valuable products and services to support the UK’s economic capability, has already been working closely with the project to explore the future of travel in Milton Keynes.

Named by combining Intelligent Mobility and Innovation, the Imovation Centre will offer modelling and testing facilities, allowing new products to be properly trialled and demonstrated. Dr Cable launched the centre by entering the first ever journey on a new app designed to measure journey experiences across multiple modes of transport. Dr Cable underlined the economic benefit that transport innovation would provide on a national scale.

Steve Yianni, Chief Executive of the Transport Systems Catapult, highlighted the capability of the centre’s ambitions, in terms of improving travel experience. He asserted that Intelligent Mobility initiatives would “harness new technologies to create seamless journeys, where transport is smart and connected, and delays and congestions are a thing of the past.” The work of the TSC and the facilities at the Imovation Centre will have no small part to play in MK:Smart. The MK:Smart Motion Map,one of the key technologies that will be produced by MK:Smart, will benefit from the involvement of the TSC in the project, firmly aligning the project with this significant innovation engine.

The Imovation Centre’s launch is the signature event of TSC’s Imagine Festival, running until 19 June. Read more about the Imagine Festival’s ‘Designing the Future’ event.