This event was co-organised by The Energy Club –  a network for sustainability professionals – and The Open University, in order to mark EU Sustainable Energy Week 2014. Councillor Matt Clifton, from Milton Keynes Council, gave a presentation to explain the rationale behind the MK:Smart project.

Councillor Clifton underlined the global trend towards urbanisation, asserting that 50% of the global population had become urbanised by early 2009. In our increasingly urban and online world, he stressed the necessity for smart city projects, which aim to turn ‘thinking cities’, in which the vast majority of residents are connected to the internet by various devices, into ‘homes to smart citizens’ where people are better-informed and manage their own lives more efficiently, through the intelligent use of data in relation to their surroundings and consumption of resources. 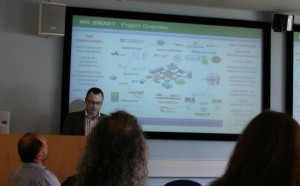 Matt explained that a smart city is one in which technology is used to achieve sustainability in terms of the local economy, environment and quality of life through for example, using data in a smarter and more open way to improve city services. Councillor Clifton also noted the benefits of the project to our city, as he claimed it acts as a positive step towards our credibility. “MK:Smart puts Milton Keynes on the map.”

In the same vein, speaker Professor William Nuttall, who introduced attendees to OU Energy, an energy networking initiative from The Open University, noted that Milton Keynes had a “unique offering” and was therefore an ideal location for such a smart city project. “Milton Keynes is ‘can-do’ place with a natural enthusiasm for change and development.”

The speakers who followed presented different approaches to cutting energy usage and reducing carbon emissions. Haydn Young from GAIA, an energy sustainability organisation, shared the golden rules for achieving behaviour change among employees in terms of saving energy, while David Harnett from Milton Keynes Council advocated meeting energy reduction targets through adapting work environments with loft insulation and improving council services such as lighting. Harnett announced that Milton Keynes Council had made £1.25 million in savings through energy efficiencies and that the council’s current focus would now be on implementing the use of LED lighting.

Similarly, guest speaker Nicky Laurence, from Volkswagen UK, presented some encouraging statistics in relation to energy savings. She noted that while ordinarily heating contributed to 30% of workspace energy costs, she had found that by simply reducing temperature settings by 1°C across offices and showrooms, energy consumption could be reduced by an average of 8%.

Representatives from MK:Smart also attended Imagine 2050 an ‘Energy Week’ event held at The Open University. This was an opportunity for residents and businesses in Milton Keynes to help shape the city’s 2050 vision for a low carbon future through providing feedback on the council’s proposed refresh of its Low Carbon Living Strategy.