MK:Smart is one of seven UK City Government Initiatives featured in a report commissioned by the Future Cities Catapult (FCC). Geoff Snelson from Milton Keynes Council, attended the launch event. 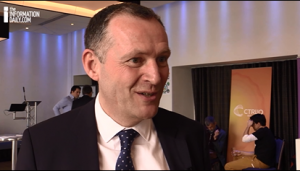 Snelson, MK:Smart Executive Board Member and Director of Strategy at Milton Keynes Council, presented at the launch of the report ‘UK Capabilities for Urban Innovation’. He provided a response to the report and described how local authorities are building partnerships between universities, businesses and the public sector for urban innovation projects.

“Cities are quite rightly seen as innovation systems and the way in which Milton Keynes is integrating projects such as MK Smart at city scale means we are now is now being recognised nationally as an exemplar.” Geoff Snelson, Milton Keynes Council

The FCC describes itself as a place where cities, businesses and universities come together to develop solutions to the future needs of our cities. This global centre of urban innovation worked together with engineering firm Arup to produce this report on the UK’s Future City capabilities, in association with UK Trade and Investment. MK:Smart was featured as a demonstration of the UK’s ‘Civic Capabilities’. The paper demonstrated the significant role that city councils are making in increasing the country’s Future City expertise. This extended not only to “supporting experimental and innovative approaches to urban management in the UK”, but also to “working in partnership with business and research centres to connect innovation with real-world challenges and demonstrate new solutions in situ.” This is certainly the case for MK:Smart, which is a collaborative innovation programme between The Open University and Milton Keynes Council, as well as a group of partners including businesses such as BT.