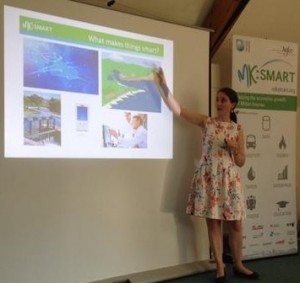 Valerie Houlden presents about how we can manage water use 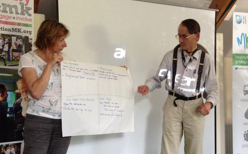 There were seventeen attendees who ranged from local residents to representatives of organisations such as Transition MK, Milton Keynes Council and the Oxford Flood Network. The event began with some presentations given by Valerie Houlden (HR Wallingford), Susan Fennah (Anglian Water) and Prof. Gerd Kortuem (The Open University). Susan provided expert advice on domestic water saving methods, while Valerie demonstrated how much water is used in the home . She went on to explain why this was important in relation to the scarcity of water in MK, which is expected to worsen due to climate change and the growth of the city. Professor Kortuem, who leads the Citizen workstream of the MK:Smart project, gave an overview of the idea generation process and talked about the support which will be available to groups wanting to develop project ideas. For example, support might take in the form of advice or small grants. 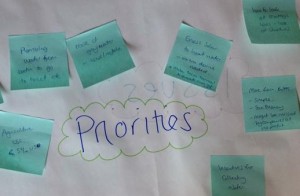 Following the presentations the event facilitators and guest speakers worked with delegates to develop ideas around education, raising awareness and practical technological solutions.

“The ideas that came out were very good. I can see how these initial project ideas will turn into great project proposals.” Prof. Gerd Kortuem, The Open University

Attendees brainstormed MK residents’ priorities for a new water demand management system. The ideas that were generated were fantastic, including an awareness campaign specifically for MK, which took inspiration from Anglian Water’s ‘Love Every Drop’ campaign. This would involve running a series of exhibitions and show real examples of how people had adapted their lives and homes to save water. The aim would be to better communicate the risk of reduced access to water due to the growth of the city in the future.

Other ideas included ‘Neighbourhood Wash’ and ‘Friends on Tap’, where neighbourhood programmes could be initiated to identify how your neighbours could support one another by sharing ideas about saving water. For example residents could show each other how to install a water butt in their garden.

Despite it being a hot July afternoon, it was a fantastic event, with a lot of positive energy and the generation of some brilliant ideas for creating a more sustainable future for water use in MK.