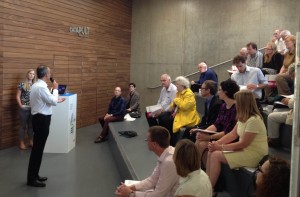 Our August community workshop on the future of transport was held at the Transport Systems Catapult (TSC). The TSC are thought leaders on emerging transport technologies set to improve the movement of people and goods at a global scale. Their work includes the exciting trial of driverless cars in Milton Keynes, expected in early 2015.  Neil Ridley, Chief Business Development Officer for TSC, opened the workshop and after welcoming participants he gave us a brief intro to TSC and their innovative work.

There was a brief introduction to MK:Smart Citizen Labs from me, then I handed over to Professor Stephen Potter and Dr. Miguel Valdez from The Open University. They gave a fabulous presentation highlighting their work developing the MK:Smart Motion Map – a dynamic map showing traffic flows and pedestrian activity in real time. Stephen and Miguel also provided thought provoking ideas around social innovation and how users could share their travel information with the platform in a positive way to help others make better-informed travel choices. They compared this mutually beneficial interactive relationship with the success of Wikipedia, which works thanks to the contributions of the public. 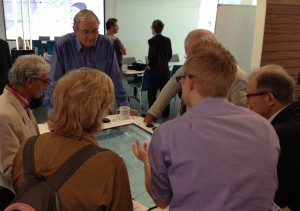 Our 22 attendees then explored the use of the MK:Smart Motion Map by sharing ideas about how we could make the most of its capabilities in MK. Older citizens shared their perspective on travel in the city and we heard a wide spectrum of viewpoints from cyclists, pedestrians, bus users and drivers in MK. We went on to discuss different uses of the technology, while also highlighting challenges such as data privacy and whether data sourcing should be citizen-led or led by the local authority. Amongst these considerations we heard fantastic ideas, such as how the MK:Smart Motion Map may be used to report incidents or congestion and create a user-controlled interface for people taking public transport. We considered how bus passengers’ smart phones could  be used to provide information about bus journeys , and how that could inform anyone wishing to catch a bus on the route, location and timeliness of buses. In addition, attendees considered how being able to judge the pedestrian traffic in certain areas may help people feel safe when walking in different parts of the city. Would you prefer to walk home through the park if the MK:Smart Motion Map showed you that there was a well-attended event taking place there, so you would not be walking alone?

The focus of our next MK:Smart Citizen Lab event will be Energy usage in Milton Keynes. Book here.