Milton Keynes is certainly leading the future of the transport landscape with developments such as the first UK deployment of a wireless charging electric bus route. Now autonomous vehicles are set to become part of the UK transport landscape, MK is on board. 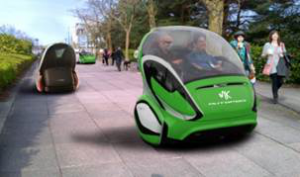 In August business secretary, Vince Cable gave the green light for autonomous vehicles to be permitted on public roads in the UK from January 2015, and announced a £10m research competition for the integration of driverless cars onto UK roads from the Technology Strategy Board, the Department of Business Innovation and Skills and the Department for Transport.  Milton Keynes is already ahead of the game in autonomous vehicles as it will have a number of self-driving pods in the city centre in early 2015, as part of the LUTZ Pathfinder Project, run by the Transport Systems Catapult (TSC). The TSC have strong associations with MK:Smart, working to enlarge our knowledge pool through consultation and events, recently hosting the MK:Smart Citizen Lab, at their headquarters on 11 August.

The pods will be two-seater vehicles with a maximum capable speed of around 15 miles per hour. Throughout the trial period, one of the seats will be occupied by a trained operator who can take manual control of the pod if required. These pavement-based pods will increase the number of mobility options available to MK residents. Other key benefits are that they could reduce congestion and carbon emissions, which are priority issues for Milton Keynes Council, exemplified by its Low Carbon Living Strategy.

Geoff Snelson, Director of Strategy for Milton Keynes Council, recently commented on the links between MK:Smart and the driverless cars:

Driverless cars are a project in their own right, but the plan is that they will also be linked to the MK:Smart Motion Map. They will also be capable of machine-to-machine communication which will help to inform guidance systems and improve our understanding of how driverless vehicles relate to their immediate environment. If we can support these needs by gathering data and providing information from the MK Data Hub it provides opportunities for all kinds of new and interesting innovations.  The MK Data Hub has the potential to help in the prediction of congestion and provide effective routing for driven and driverless vehicles by combining a variety of datasets.