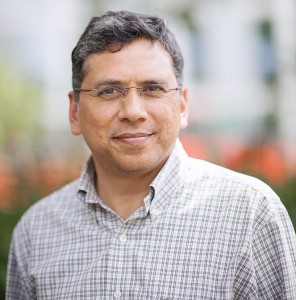 Jyoti Banerjee works on our Education work stream. He is a partner in Fronesys – an SME  offering sustainability and advisory services.

Where are you based?

What area of MK:Smart do you work on?
Actually, I had the opportunity to work on MK:Smart before the project really started. I led the work at Fronesys to put together the business case for why it would it would be a good thing for the project to happen, and what the impacts and the consequences of the project could look like for the city of Milton Keynes. So that was my initial engagement with MK:Smart.

Then, once the project received its go ahead, Fronesys has been involved in that part of the project relating to Smart Cities Education. Our focus is on creating an education programme that helps people and organisations make wise decisions about Smart Cities.

In our work, we look at three different categories of organisation. The first is local city councils: they are the ones who are usually in the driving seat when it comes to making decisions which enable a city to go down a particular Smart Cities path. The second category we are interested in covers a number of other players such as service providers and other stakeholders in the working of a city.  Then the third category is those who provide the technologies and the capabilities that enable smart cities to function.

It’s really business training. For example, if you’re an employee of the city council in Milton Keynes, you may be participating in all sorts of decisions about the kind of smart cities capability you’d like to see in your city. Our education programme is designed to help people make those decisions, plus help other participants in putting these programmes together: how they interact together, raise finance for each other, and how they can measure the results of what they do etc.

What are your highlights from MK:Smart so far?
Fronesys had set itself the goal of engaging with people in our target groups. We didn’t want to be simply yet another provider of smart city educational materials, as there are already quite a few organisations doing so.  Instead, we engaged with a number of participants in smart cities settings. These ranged from city leaders to technology providers, as well as service providers and others who are participating in the smart cities ecosystem.

We came away with the view that many of the courses that are available on Smart Cities relate to the technologies of Smart Cities. For example, there are courses on how to set up a smart grid, or how to use technology to plan traffic flows. All that sort of stuff. We thought that there’s no point replicating that but we also felt that there was a significant gap in the market – people who need to make decisions about smart cities technologies don’t need so much help on the technology side, so much as they need help in understanding the economic and citizen impacts of the decisions they make. As an illustration, a city like Milton Keynes, is putting in a data centre. People in councils need to know a little about data centres, so that they can make a decision about them, but not about how a data centre works, or how they are constructed. The latter are things that you want people who are experts in that area to deal with. I’m not expecting that a city leader would be in a position to make a decision about technology choices, but they need to understand the business impacts of the choices they make. If they make one kind of data centre decision – these could be the impacts, while if we make another type of data centre decision – those could be the impacts. And they need to be in a position to understand the different kinds of impacts and be able to make a judgement between those. That’s what we’ve decided to focus on. We explore the citizen impact, the economic impact, and the social impact of smart cities decisions, and help people make good decisions based on those impacts.

So coming to that conclusion was a highlight for you so far?
Absolutely. It’s the key finding for us in the first phase of what we’ve done, and it has emerged from the engagement we’ve had with stakeholders. And it certainly wasn’t an idea we started the project with. It is real highlight for me in that it is entirely driven by the work on MK:Smart.

Who do you work alongside within the project?
I represent Fronesys alongside the other consortium partners in the MK:Smart Project Board as led by Enrico Motta. However, our key day-to-day relationship is with Gerd Kortuem, who leads the Education area of MK:Smart.

In addition, there is potential for a significant cross-over in the work that we’re doing with the work that The Open University is doing to create the MOOC (Massive Open Online Course). The goal there is to create an online resource that people around the world could potentially sign up for and use to educate themselves about Smart Cities. As a result, we’ve started engaging with Lorraine Hudson, who Gerd has recently appointed to work with him on creating the MOOC. She brings deep experience and expertise in Smart Cities work, because she led the Smart Cities project at Bristol.

What is coming up in the Education area of MK:Smart over the next few months?
We have spent the last six months or so, focusing on the idea that people really need to learn about the business impact of the smart cities decisions they make. What we’re doing now, and over the next few weeks is to test that idea. We’ve created some draft concepts for an educational seminar programme, and we want to test those ideas with smart cities decision-makers.

Do you have any predictions for Smart City developments in the future?
At the moment we’re seeing a lot of smart cities ideas in their earliest, nascent phases. They still need funding from government in the terms of educational programmes, like HEFCE’s funding for MK:Smart, or in terms of research funding, which you see with the government’s Catapult initiatives. I think smart cities will grow beyond that kind of thinking, where decisions are driven by the economic case, the business case. This will mean that cities will have to be a lot smarter in understanding how the various initiatives that they participate in connect into the big picture of economic change.  They will have to sell that story better to other organisations, to encourage them to participate in what they’re doing, but also to investors and to the city of London, to raise funding. We can’t expect smart cities to be driven by central funds from government. If smart cities make a positive impact in the cities that they are operating in then it should be straight-forward for these initiatives to be self-funded and sustainable in their own right. So that is the direction that we’ll see smart cities go in.