Rebecca Brown from Community Action: MK Reports on our latest MK:Smart Citizen Lab event ‘The Big Energy Debate’; where we were asking “What role can communities play in developing solutions to our energy challenges”

We held our first MK:Smart debate on Friday 5  September at the National Energy Foundation in Knowlhill as part of the series of ‘Citizen Lab’ workshops run by Community Action: MK for the Citizens workpackage as part of the project. The event provided an opportunity for us to trial a debate style format with key speakers, a panel and audience participation. 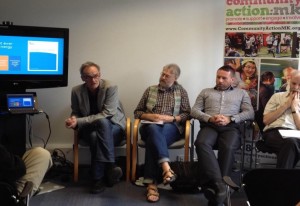 This change in style, compared to the workshop format we have used in the rest of the ‘Citizen Lab series’ was run as a pilot. There were 19 people in attendance from various organisations, including Transition MK, TEAM Energy Auditing Agency, Tech Mahindra and MK citizens. The debate focused on a number of interesting points; 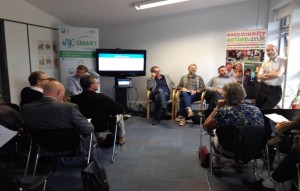 A range of interesting ideas emerged and were discussed by the participants, for example the development of a Carbon sharing bank and implementing a Carbon Budget. Other ideas that were discussed included Solar panels on Social housing, Community woodlands and Energy sharing initiatives. This was an  enjoyable and interesting morning!