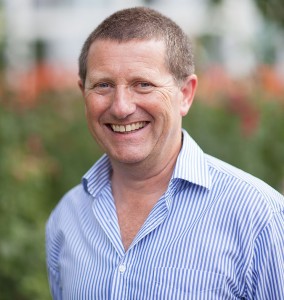 John Miles works on our Transport work stream. He is a Research Professor in Transitional Energy Strategies at Cambridge University and a Strategic Consultant on matters of Energy and Transport at Arup.

What area of MK:Smart do you work on?

I lead the Transport area of the project. Our aims are very simple. Milton Keynes is the fasted expanding city in the UK, so it’s easy to predict that there will be a greater and greater demand for transport in the city. Milton Keynes’ roads have been designed for a city of around quarter of a million people. Actually it’s now expected to expand to around 350,000 people, so the implication of that is obvious, in terms of traffic, the roads will become increasingly congested.

The whole purpose of our work around Transport is to fast-forward ten years, to have a look at the predictions for increased traffic flow and then think about how we will solve that problem. So we’ve called our project Cloud Enabled Mobility, because it’s about using information from the cloud that’s available to everybody to try to make our movements simpler but more effective in the future.

What is your role?

I lead the Transport work stream, so I have oversight in everything, but I don’t carry out the work behind the scenes – which is a nice place to be! We’re focusing our efforts on trying to extract all the information that is available around the city and putting it together in a form that is easy to understand and use. So, we’re developing an app called MotionMap. Its purpose is to be able to tell you on your handheld device, in a very simple way, how busy it is at any place in the city. Our aim is that if you’re wanting to travel from point A to point B in the city in the future the first thing you’ll do is look at MotionMap.

The MotionMap app will tell you how busy the streets are, how much traffic is on the roads, and how busy it is at your destination point. For example, if you’re going to the city centre to go shopping, it’ll tell you how busy it is and therefore you might choose not to go straight away because you may see that it is currently heaving with people. If you make that simple decision of “I’ll go tomorrow”, then you’ve relieved the congestion today. Our hope is the way that the MotionMap will work is by putting information into the hands of the user.  This will influence the user’s travel choices. The key thing is that the user themselves decides. This can help them avoid getting stuck in a traffic jam or a packed car park when they arrive at the centre.

Our job now is to research how best to do that. How do we measure busyness?  How do we put this notion of busyness in the hands of the user? How then might you nudge the users to make the decision which will help the overall picture of congestion be relieved?

Where are you based?

My team and I are based in Cambridge and Cambridge University is heading the Transport side of MK:Smart. As it happens I live near Milton Keynes, so it’s never difficult for me to come to the city for a meeting here. Given my proximity to the city when looking at the proposal for the project I could look at things from the perspective of a local citizen. I understand what it’s like to move around the city and go shopping or to the cinema. This local knowledge certainly comes in useful.

Who do you work alongside?

I stay in touch with leaders of different areas of MK:Smart – Water, Energy and Business etc. They are the people that I work alongside, in a group which is headed by Enrico Motta, who is the overall project leader. There are people in Cambridge who I work with, but my team is still growing. The most exciting part of the project is working with like-minded people. Projects such as MK:Smart attract good people.  Sitting around a table trying to solve a problem with individuals from different fields – that’s a nice experience.

What is special about the way you are approaching Information-Related Transport Systems?

What’s unusual about what we’re doing is that we’re trying to measure busyness, which as a concept is a bit different to what other people have done in the past. That’s not to say that we don’t take some of our inspiration from elsewhere. We constantly have a look at what’s going on in different places because there’s no point reinventing the wheel. For example, we have one person in the project in particular who is looking at the other similar apps that people are developing, or who have developed.

When it comes to busyness there are two puzzles to solve. One is how to measure how many people, or how many cars are in a place, and the second is how you convey that in a visual manner so that it is meaningful, allowing people to instantly say – “Oh it’s too busy I’m not going to go” or “It’s too much of a traffic jam I’m not going to try”. The usability of the app is essential, because you can have loads of data, but if you cannot display it clearly in a straightforward way then people may just get bamboozled by it!

What should we expect from the Transport area of the project over the next six months?

Over the next six months we hope to have rolled out the pilot of our first demonstration of the MotionMap. It won’t be in its final format, but it will have a number of capabilities that will give everyone a pretty good idea of what the thing is going to look like. The purpose of that pilot is two-fold. It will aim to demonstrate what the finished product might look like in a few years’ time, and will highlight any difficulties that we might come up against, so that we can prepare ourselves to deal with them. It will be half exploratory and half demonstration.

Who will experience the pilot?

A limited number of people will interact with the pilot app. Initially people from within the project will give us their feedback, but later down the line we would quite like to get some public engagement. If we’re lucky, within six months we will have some big demonstration screens up in Central Milton Keynes, which show the live busyness map of the city centre.

Do you have any predictions about the future developments of Smart Cities?

It feels like stating the obvious, but we expect that Smart City technologies will make everything easier. By definition, people develop apps to try to relieve inconvenience. The more apps that are around, the more likely that a small number of them will be really useful – so I think there’s a very natural free market process. If everybody and his dog are developing apps, there are thousands of these apps around and lots of them will be useless, but some of them will be useful and some of them will be really useful. The really convenient apps will be the ones that live on, while their competitors will die off over a period of time with this very pure Darwinian process.

I imagine that in ten years’ time that there will be MotionMap, or something like it, and there will be other things too that people will use that just make life a lot easier. So you won’t need to go and wait at the bus stop and think “When’s the next bus coming?”, because you won’t go to the bus stop until you can see the bus is approaching. It’ll just become a part of everyday life. You won’t even think about it.