The data hub installation team have arrived at UCMK with the considerable volume of hardware needed to begin building the MK Data Hub. 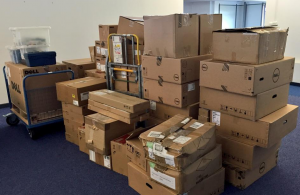 The MK Data Hub is the key component that will curate all data in MK:Smart. It will be hosted in Central Milton Keynes at UCMK (University Campus Milton Keynes), part of the University of Bedfordshire.

The technical design of the MK Data Hub has been primarily undertaken by project partners The Open University and BT, supported by the University of Bedfordshire and others in the development of a computing architecture that will gather, store and analyse significant volumes of data. This will allow for innovative apps and services to be developed that will inform and support the growth of Milton Keynes. 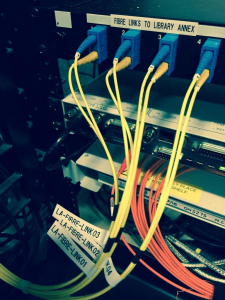 The Data hub Technical Operations Team have given themselves the nickname MK:Smart DTOP and each stage of the installation process has been documented on Twitter.

It all began with the team tweeting a picture of the stacks of boxes containing data hub equipment they would be building at UCMK in Central Milton Keynes. Since then they’ve been working non-stop  and connecting everything up with hundreds of metres of both copper and fibre cabling.

The giant 3D puzzle has required the DTOP to work long hours, and take regular breaks to refuel with pizza, but nothing has dampened their spirits, not even the interruptions caused by unexpected rain showers – not ideal for carrying electronic equipment between buildings!

In the coming weeks significant progress will be made configuring the equipment to connect to the internet, internally communicating between the two main site locations and building and installing the software that will run the MK Data Hub.