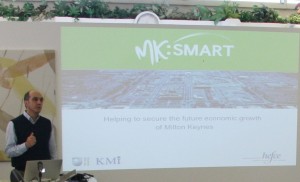 Project Director, Enrico Motta will be speaking about how MK:Smart affects citizens

On 6 March 2015 attendees from local businesses and the community will have the opportunity to discover the potential benefits of smart city technologies being developed in Milton Keynes. UCMK and Transport Systems Catapult are organising a series of exciting mini-seminars, workshops and demonstrations that will bring these exciting developments in Milton Keynes to life. The event will introduce attendees to several initiatives taking place in the context of the future city agenda, including some of those underway in the MK:Smart project.

The fifteen minute seminars will cover topics such as autonomous transport in Milton Keynes and how Big Data can benefit citizens and local businesses alike. The talks will be followed by the chance to explore a marketplace of practical demonstrations of real-life applications of smart technology in our city.

Speakers will include MK:Smart’s Project Director, Enrico Motta, Gerd Kortuem, leader of the Energy, Citizens and Education elements of MK:Smart, and Steve Yianni, CEO of the Transport Systems Catapult.