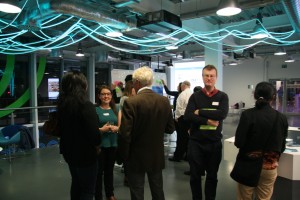 Our MK, the new collaborative website designed for sharing ideas on how to transform Milton Keynes into a smart and sustainable place to live in, was showcased at the launch event held at Transport Systems Catapult office on Wednesday 23rd September. 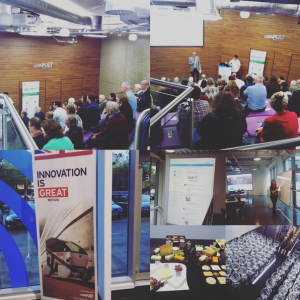 art of the city-wide project, MK:Smart, it’s a platform for all people living in Milton Keynes who want to have their say in shaping the future of our city. Individual citizens as well as existing groups can share their ideas through the website and apply for up to £5K funding to run projects beneficial for the city’s transport, energy, water, health and environment.

The launch event, with cheese and wine, was organised by the Citizen Engagement team, one of the eight workpackages of the MK:Smart project, with help from its partners in the Transport workpackage.

We were delighted to see a number of MK citizens and representatives of local organisations, groups and businesses, keen to find out more about this local initiative. Many of them shared their ideas with us at the event – by leaving comments at our ‘inspiration station’ and expressed their eagerness to be part in running or helping to run local projects.
The event featured presentations from the key people behind the MK:Smart project, including members of the Citizens Engagement team at Community Action: MK and The Open University, who explained the concept of and the core objectives behind the smart cities initiative.

The real highlight of the presentation was a talk from Michael Sheppard – MK citizen, teacher and a keen activist involved in a number of local initiatives, including Transition MK and the MK’s Green Party.

Michael has just been announced as the winner of the first round of Our MK funding competition and was telling the audience about his plans for the innovative project related to off-grid solar lighting. You can visit Michael’s page on Our MK to find out more about his project and you can also sign-up to our monthly newsletter to receive updates on how Michael’s progressing in the coming months.

If, like Michael, you have an innovative and impactful idea for a project that could be run in MK, visit Our MK and find out more about our Citizen Ideas Competition, and your chance to win up to £5K of funding.

Follow news about Our MK and the MK: Smart Project on social media – search #MKSmart & #OurMK!