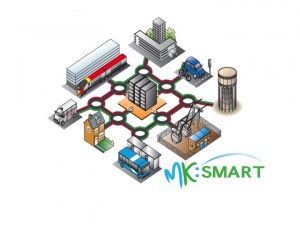 A panel of 4 VIPs were hosted at the The Open University’s Knowledge Media Institute, for MK:Smart’s second year Review.

On Tuesday 2nd Feb 2016, the project’s management team and key partners gathered for the project’s formal review. Prof. Enrico Motta, MK:Smart Director, opened the meeting with an overview of the project and highlighted the successes achieved over the last year, which included the attraction of large associate partners, such as E.ON, Tech Mahindra, Huawei and Samsung. The day included presentations of the progress to date from the leaders of the project activities.

“The project’s tangible success story is seen from the list of organisations  engaging with it, with whom an innovation network has been created” said Blackman, who acted as rapporteur for the day. “Milton Keynes is now a brand” added Mottram, “which could be used as a model for other smart cities to learn from”.

Overall the review was a great success and we are looking forward to the final eighteen months of the project.