Chief Liaison Officer, Alan Fletcher, was recently part of a discussion panel: Extracting the value of data from a city

The panel, chaired by Damien Smith, Economic Advisor at the Department for Work and Pensions, also included Finlay Kelly, Economist for Future Cities Catapult and Lee Omar, CEO of Red Ninja as part of a day-long event at The Brewery in London’s EC1Y.

Attended by over 500 people, the showcase invited senior representatives from local authorities and city governments, technologists, investors and businesses to look at the development of and opportunities for smart cities in the UK, via:

The keynote talk was given by MK:Smart partner, Future Cities Catapult and was run by The Knowledge Transfer Network (KTN) with Innovate UK. 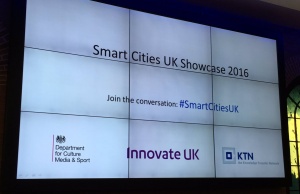