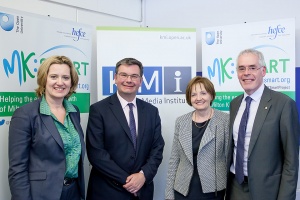 The Secretary of State for Energy and Climate Change, Rt Hon Amber Rudd MP, visited the MK:Smart team in the Open University’s Knowledge Media Institute to learn more about the project and the OU’s cutting edge research and development of applications.

Led by the OU’s Vice-Chancellor, Peter Horrocks, the MK:Smart team, represented by Alan Fletcher and Blaine Price, outlined the Milton Keynes Future Cities Programme, and its connection to the MK:Smart project, in particular focusing on the MK Data Hub as a way to innovate the city’s environment.  Of key interest was the research findings of Blaine and his team on the use of solar energy battery storage systems to shift energy demand and balance load.

There is clear interest in sustaining MK:Smart’s presence in future innovation and development in Milton Keynes, as MK continues to become a more powerful economic presence in the UK, and in continuing the dialogue and relationship between MK:Smart and government.

The Open University regularly hosts visits from politicians from different political parties who express an interest in learning more about the OU’s work.