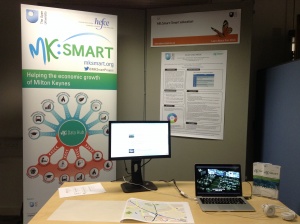 Last week, the project’s educational work was exhibited alongside other stands within the academic community. Alongside the A3 poster, large MK:Smart banner and leaflets, the stand included the first paper prototype of the sim-city data challenge map and displayed the MOOC’s interface.

The event, which featured around 100 stands, was attended by a large proportion of the OU’s staff from its various departments. Many of the people spoken to were residents in Milton Keynes, who would benefit from current MK:Smart projects in the coming years and its legacy in the years after that. “They were very enthusiastic about our educational work’s value” said stand member Matthew Barker “and MK:Smart’s work in general.”

In addition the Learn About Fair was not all about educating others, and the MK:Smart team benefited from learning about other educational work conducted by other Open University teams in schools, homes and prisons across the country. Barker said of the experience “We gained inspiration from scientists, psychologists, engineers, sociologists and business guru’s alike to take forward and use for the MK: Smart projects. It was a great day!”