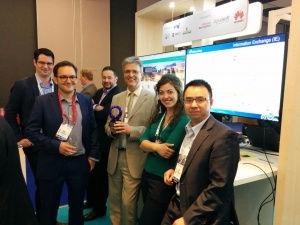 The latest developments in MK Data Hub capability were shared on the International stage in Nice last week at TM Forum Live!– receiving huge interest and achieving the “Best Commercial Catalyst” award. Geoff Snelson, Director of Strategy at MK Council presented in the Smart Cities Summit, whilst a joint BT and OU  team led by Nektarios Georgalas of BT revealed new demonstrations of end-to-end security and service level guarantees for data feeds, presenting demonstrations at the showcase across four days.

TM Forum is the primary standards body for telecoms and IT management systems and TM Forum Live! is the TM Forum’s primary conference, attracting around 5000 attendees from industry and academia. Catalysts are special projects to break new ground and move industry thinking forwards- the MK:Smart team picked up the award against 27 other catalyst projects from organisations such as IBM, EMC, Vodafone, T-Mobile, and Orange.

The work involved developing MK:Smart to handle service level agreements for data feeds, demonstrating a security solution working end to end from sensor devices through to the MK Data Hub through to applications, whilst addressing privacy. This included new contributions from Associate Partner Huawei and contributors BearingPoint and CloudSoft.

Nektarios Georgalas stated “It’s wonderful to pick up a best Catalyst award for the second year running, following on from the win last year, against stiff competition. It shows how the MK Data Hub’s capability is  leading edge and is seen as a bench mark in the industry”

Geoff Snelson stated “At TM Forum Live! it was clear that the MK Data Hub is a widely admired project and I believe its success is due in no small part to great teamwork across a group  of top quality partners”.