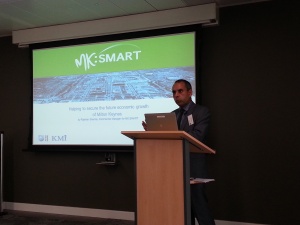 Rajinder Sharma gave a keynote presentation at the Smart Cities in India summit in the City of London, organised by the Ministry for Growth.

Topics covered at the summit included Rapid Transport Systems, Infrastructure, Big Data and Energy. In addition there were panel sessions on partnership collaboration, the legal framework and funding smart cities projects.
The event was opened by Vijay Vasanta, the First Secretary at the High Commission of India in London who gave an introduction to the £10 billion Government backed Smart Cities Mission in India. This is an ambitious urban renewal project with the mission of developing 100 cities all over the country making them citizen friendly and sustainable.
Rajinder who is MK:Smart’s Commercial Manager based at UCMK, summarised the occasion, “ Not only was this was a great occasion to raise further awareness of MK:Smart as a pioneering model to emulate but also an opportunity for UK based SME’s to realise the enormous business potential of developing smart city applications to export to international markets.”