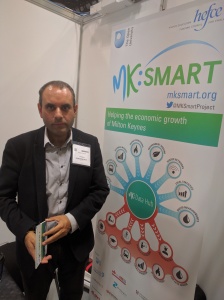 MK:Smart paired up with SEMLEP (the South East Midlands Local Enterprise Partnership) to exhibit at the Digital Careers Roadshow in London yesterday.

The event, led by Techmix at the Queen Elizabeth Olympic Park, was supported by the Mayor of London and the London Enterprise Panel.

London is one of the world’s leading cities for technology, entrepreneurship and digital creativity. It’s home to over 44,000 digital, creative and media companies, all competing on the world stage.

“The show was a good opportunity for people to engage directly with employers,” says MK:Smart’s Commercial Manager, Rajinder Sharma. “It was also a great platform for those who need inspiration to innovate and grow their own tech start-up in one of the best places in the world to do so.

“MK:Smart can support this creativity by providing aspiring entrepreneurs with the options to develop smart, city-wide applications that can generate new talent.

“I’m delighted to have been a part of this event and look forward to working closely with the capital’s tech start-ups to the mutual benefit of both London and Milton Keynes.”