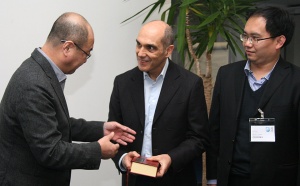 Senior figures from the worlds of planning and business in China visited Milton Keynes on Friday (4 November) as part of a UK mission to potentially kick-start a major international smart city partnership between leading Chinese and UK cities.

Milton Keynes Council, the city-based Transport Systems Catapult and The Open University played host to the visitors from the National Development and Reform Commission of the People’s Republic of China (NDRC), one of the most important Chinese Government departments.

The NDRC’s function is to set policies for economic and social development, maintain the balance of economic development, and to guide restructuring of China’s economic system. Its Centre for Urban Development carries out international research projects, the results of which have tremendous impacts in China.

The visitors received presentations on MK:Smart and other smart projects in the city that are demonstrating how new technologies can help address the challenges faced globally by urban areas. They also enjoyed a whistle-stop tour of the city to see notable locations and gain an understanding of how the city has been able to develop and grow so strongly.

Geoff Snelson, Milton Keynes Council’s Director of Strategy and Futures, who also represents the council on the MK:Smart board, said: “We were very pleased to host this visit and to showcase Milton Keynes’ top notch smart city credentials.

“We hope it will help place us at the heart of a new initiative between the governments for closer working between Chinese and UK cities on technology projects. We have good working relations with a number of Chinese companies on smart city projects and are hopeful of securing further investment.”

The main aims of the trip to the UK were to:

The visit coincided with the news that the MK:Smart initiative has been shortlisted for the final of the Wireless Broadband Alliance’s Industry Awards 2016.

Milton Keynes is being entered under the Best Connected City Deployment, with the winner being announced at the WBA Wireless Global Congress in San Jose later this month, going up against competition such as Singapore and New York.