A collaborative catalyst project led by BT, sponsored by Milton Keynes Council and making use of the MK Data Hub, has won the Outstanding Performance Award in Catalyst Programme at TM Forum Live 2017.

The news was announced at the prestigious TM Forum Live Awards hosted in Nice, France on 17 May. Judges included representatives from high profile TM Forum members including Microsoft, OBS, a 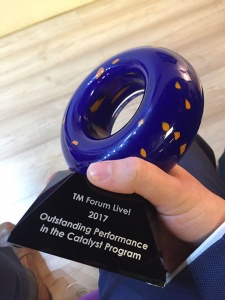 TM Forum is the global member association for digital business. It provides a platform for hundreds of members, including MK:Smart, to collaborate on creating, prototyping and delivering innovative digital services. Providing a conduit for knowledge sharing with networks of experts and professionals is just one of the ways in which TM Forum has supported MK:Smart.

The winning ‘Smart City on the Edge’ project demonstrated smart city data hub service management functions and Internet of Things (IoT) applications arranged to run at the edge in an IoT gateway, close to where the data is collected.

This capability allowed efficient operation and evolution of smart city infrastructure through multi-functional/programmable IoT gateways; improved service assurance of third party applications resource orchestration within the gateway, across multiple gateways, and/or cloud based resources; and the flexibility for third parties to deploy their own intelligence on the smart city infrastructure and pus data to Cloud IoT platforms of their own preference.